Well here is a list of books relevant to women in the blue collar trades. I've tried to do a little relevancy review on the books I've actually gotten to. And I've also tried to include pictures of the covers. I've found most of these books on Amazon, since they are the huge easily accessed mega-store. But if you can, support your local book stores (i.e. see the little note at the bottom)--you might find some odd gems laying about. Be sure to check the published date--it's kind of interesting to see when the book had come out and the various flavors of "hope" for blue collar women depending on the time it was written and who it was written about.

This book focuses on the effect of World War II on the lives of American women: the women who stayed home and volunteered or made ends meet with family members oversees; the women who supported the war effort as WACS, WAVES, SPARS, and women marines. Most interesting to me, of course, were the chapters devoted to women encouraged to join the blue collar work-force in factories and trades by the government. Thousands of child care centers sprung up, and governement contracts were held for those factories that would comply with the demands for the integration of women on to jobs. Short interviews with not only the "Rosies" but also quotes and information on how men reacted to women in their workplace. Not a lot has changed.....Amazon has a few copies.

Ok, this one is pretty dense, so I haven't read it yet. Ergh. But here's the back cover note:

Over half the women in the United States are now employed outside the home, and the proportions are comparable in manhy European countries. Yet nowhere has this revolution in the composition of the labor force been followed by the triumph of a more difficult revolution--the struggle for full equality int he rights and roles of women. Building upon research begun by the late Val R. Lorwin and Alice H. Cook, Cook and Arlene Kaplan Daniels survey recent efforts of trade unions in Germany, Austria, Sweden, and Great Britain to ensure equal opportunity in the workplace. In identifying the successes and setbacks of the European experience, the authors consider the implications for change in the agendas of American unions.... 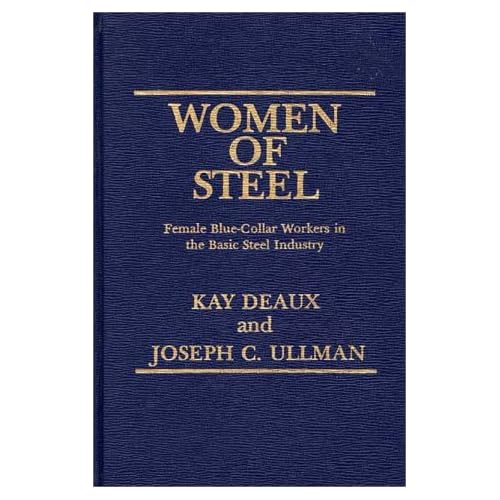 Holy crap! I looked this up on Amazon and it's like $90! Good thing I got it from the library. This was THE most relevant book I thought to the situation of the ironworkers. I haven't finished it yet, but it does make for good reading--it goes through some women's labor history, as well as job site stories/ conditions and the relations of women steelworkers with men and with each other. I think it's very relevant to the fact that the "women of steel" group of the steelworkers union has such a strong statement on their sexual harrassment policy. I'm pretty jealous.

Eisenberg, Susan. We'll Call You If We Need You. Ithaca: Cornell University Press, 1998.

I got this book a few years back from the mother of a good friend of mine. I opened it up and checked out some of the passages concerning iron worker women, got kind of depressed and closed it for a while. It really wasn't until this year I realised that the cover looked familiar because I have a similar picture of Mary Michels in my 2006 ironworker women calendar. The book is very informative, but mostly has interviews with women who were influenced by the 1978 Carter Executive Order--women who have been around for a while, which is great. But is also kind of upsetting when you see that not a lot has changed since then. Mary calls it the "Reagan and Bushes era." I've contacted Susan and she's been very supportive. You can find this book on Amazon for ridiculously cheap used. http://www.amazon.com/gp/product/080148605X/ref=si3_rdr_bb_product/104-4344182-3771134?ie=UTF8. There is also a deal where you can get the book in combination with Hard Hatted Women. This book confirms it: most groundbreaking acts arise out of mundane needs, not idealism. Sparking the civil rights movement, Rosa Parks protested moving to the back of the bus because she was tired. Likewise, women broke into male-dominated trades because the jobs paid more, not because the women were feminists. Many became ad hoc feminists as a result. They encountered discrimination, sexual harassment, unfair rules, and lack of acceptance from their colleagues. But they endured out of necessity; they were only seeking better economic opportunities. That is what behavioral scientist Ferguson learned when she studied women who chose careers as machinists, firefighters, welders, construction workers, police officers, and other macho occupations. Through more than 30 in-depth interviews, she discovered the motivations, family histories, personal attitudes, work and educational backgrounds, lifestyles, and other factors that influenced those women and their job choices. Unfortunately, Ferguson's conclusions and observations are rather limiting and dull. Fortunately, they are overshadowed by the real strength in what her subjects have to say. --Mary Ellen Sullivan

Martin, Molly. Hard-Hatted Women: Stories of Struggle and Success in the Trades. Seattle: The Seal Press, 1986.

Well I've had my falling ins and outs with Tradeswomen, Inc., of which Molly Martin is the president. Again, I haven't read this book yet. I know Lisa got the book at the "Women Building California" conference in Sacramento--and when she went to check out the section on ironworkers--it was gone! Molly was good enough to get Lisa a non-defective copy, and an apology. Molly started as an union elecrtrician and is now I think a building inspector. I picked this one up from Modern Times Bookstore. here's a book description from Amazon:

Kris Paap worked for nearly three years as a carpenter’s apprentice on a variety of job sites, closely observing her colleagues’ habits, expressions, and attitudes. As a woman in an overwhelmingly male—and stereotypically "macho"—profession, Paap uses her experiences to reveal the ways that gender, class, and race interact in the construction industry. She shows how the stereotypes of construction workers and their overt displays of sexism, racism, physical strength, and homophobia are not "just how they are," but rather culturally and structurally mandated enactments of what it means to be a man—and a worker—in America.
The significance of these worker performances is particularly clear in relation to occupational safety: when the pressures for demonstrating physical masculinity are combined with a lack of protection from firing, workers are forced to ignore safety procedures in order to prove—whether male or female—that they are "man enough" to do the job. Thus these mandated performances have real, and sometimes deadly, consequences for individuals, the entire working class, and the strength of the union movement.
Paap concludes that machismo separates the white male construction workers from their natural political allies, increases their risks on the job, plays to management’s interests, lowers their overall social status, and undercuts the effectiveness of their union.

Well I googled Mr. Lloyd Zimple and got the Poets and Writers page. This book seems more like a collection of articles and stories of workers and women and the concerns of minorities in general in various trades of the era about 1974. I actually found it for sale on ebay but I got it for myself from the public library....

anyhow: For a great San Francisco book store, I recommend Modern Times, which has a good selection of books on women in non-traditional fields, and who are really nice people. They might also be carrying the 2007 Ironworker Women calendar.

I also recommend Green Apple Books although their search engine kind of sucks right now, they do have a union warehouse. And the store itself is great--on Clement St. by uh....7th Ave? in San Francisco.